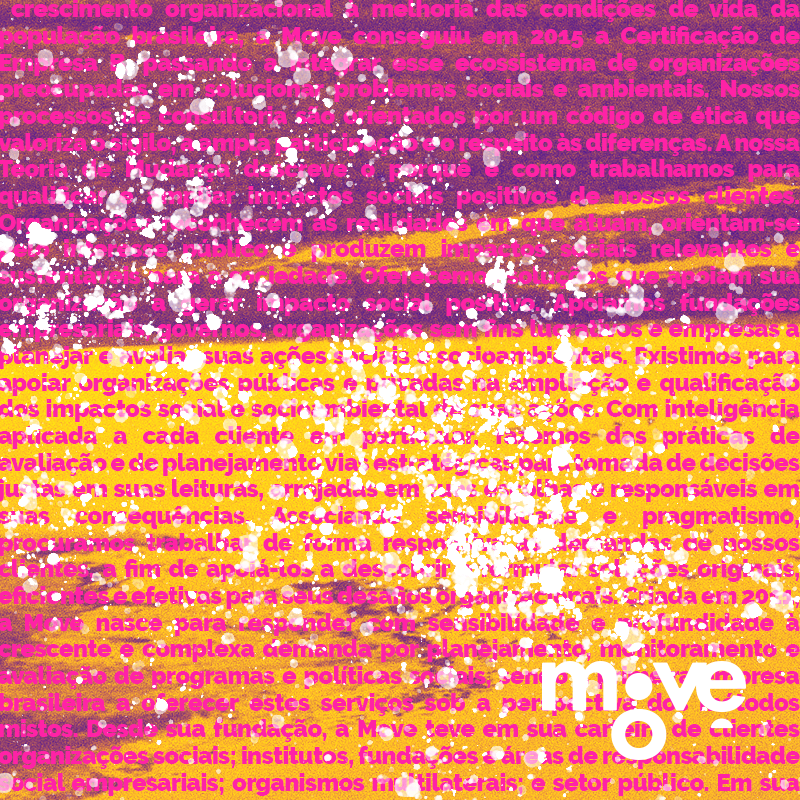 Black Awareness Day is celebrated on 20 November. The day was established by Law no.12,519 of 10 November 2011 to honor the death of Zumbi dos Palmares, leader of the black resistance movement in the days of colonialism and slavery in Brazil. The idea is to foster recognition of the importance of the African Brazilian population for the cultural, social and economic identity of the country.

As awareness concerns our capacity to understand the world and ourselves in various ways, there is a need to move in the direction of raising this awareness. It is common for us to say that a certain event raised our awareness. But what brings this about? How does knowledge and awareness of our own lives and of the world around us build up inside us? Move has been working for seven years on diagnoses and evaluations for social projects and policies in various fields and we know that data and statistics are a good way of raising awareness. Data provide an objective view of only one part of reality—not its totality—but, when based on unbiased parameters, they have the power to raise questions regarding the different experiences of different members of a group and make it possible to construct narratives around them.

It is therefore only fair that we attempt to raise awareness in readers of this text regarding the reality experienced by the black population in this country.

Data from the 2017 Atlas of Violence show that 71 out of every hundred people murdered in Brazil are black. African Brazilians are 23.5% more likely to be murdered compared to Brazilians of other races, controlling for the effect of age, level of schooling, sex, marital status and area of residence.

These data provide incontestable evidence of the racial inequality that blights Brazil, the most gruesome facet of which is the homicide rate. The story here is a deadly one. However, data alone cannot change anything; they merely illustrate the situation. There is, however, a need to interpret these data in such a way that suggests possible steps towards redressing these serious shortcomings.

In an age in which organizations are increasingly attempting to base decisions on data, awareness of the situation outlined above makes it clear that it is not for reason of lack of evidence and statistics that public and private organizations shy away from the fight against racism in Brazil.

On Black Awareness Day, we should ask ourselves how committed we are to changing this narrative. Despite the adverse political climate, in which social movements and the rights of minorities are constantly coming under attack and the validity of affirmative action is routinely questioned, there is an urgent need to turn this narrative of death into one of life for the millions of black men and women who live in Brazil.

This website uses cookies to improve your experience while you navigate through the website. Out of these, the cookies that are categorized as necessary are stored on your browser as they are essential for the working of basic functionalities of the website. We also use third-party cookies that help us analyze and understand how you use this website. These cookies will be stored in your browser only with your consent. You also have the option to opt-out of these cookies. But opting out of some of these cookies may affect your browsing experience.
Necessary Always Enabled

Any cookies that may not be particularly necessary for the website to function and is used specifically to collect user personal data via analytics, ads, other embedded contents are termed as non-necessary cookies. It is mandatory to procure user consent prior to running these cookies on your website.